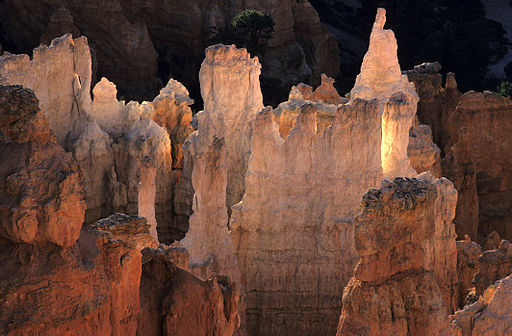 Darting eyes of the patchy coyote,
no bodies in the brush because this is not
some simpleton dumping ground;
this is exploding firework skies,
tracheostomies running a line back to
umbilical zero, those tiny pink cries that
seem to wrap themselves around everything,
the children and the streets with the same names
so that one could hardly be blamed for driving
over both with the stereo cranked;
a bump in the road, is that not what the more
philosophical among us always say?

Campsite arsonists collecting kindle.
Run into the canyon and the canyon says ouch!
Barefoot over thorns drawing blood.
Our coiled white scorpion is the zodiac with intent:

This lame way I limp into everything,
surrendering conversations that never
belonged to me.

Snakeskin boots hugging the foot
of someone full of a personal venom.
Read the person and there is no need
for the diary.

He whooshes by over darkened cobbles.
His black trench coat undone so that it waves
like a hurried cape in the windless night.
My companion is startled, gives a sudden jump
he hopes I don’t notice.
The only people that demand bravery
are those that lack it.
My companion can be as scared as he is sweaty.
I am not without fault.
Half a dozen women have told me so.
I can only hope to hide mine a little better
or at least for a little longer than my
mouth breathing red-faced companion.
That simple warm buzz of electricity all around us.
Bags of garbage piled by the curb.
A few overturned and torn down the side.
The scavengers have been out early.
I let out a cough and my friend jumps again.
That queer jerky way the shoulders threaten to leave
the body and never return.

I open the closet door
to a sea of applause.

The crowd noise drowns
everything out.

Searching for a shirt
of man eating tigers.

Rolled up to the elbow,
so freckled gooseflesh can
make the rounds.

This collar pulled down with poise.
As 70,000 strong break into song.

Ryan Quinn Flanagan is a Canadian-born author residing in Elliot Lake, Ontario, Canada with his wife and many bears that rifle through his garbage.  His work can be found both in print and online in such places as: Evergreen Review, The New York Quarterly, Bourgeon, The Song Is.., Cultural Weekly, Red Fez, and The Oklahoma Review.