“Deep in the human unconscious is a pervasive need for a logical universe that makes sense. But the real universe is always one step beyond logic.” Frank Herbert’s seminal science fiction novel Dune asserts an unattainable reality, a universe represented by the innovators who see one step beyond the expected and the logical.

If assessed by his oeuvre of absurd, surrealist films, Chilean director Alejandro Jodorowsky is either many steps ahead or totally befuddled. Based on his bizarre 1970 hit El Topo and the more erratic The Holy Mountain (1973), Jodorowsky seems the latter—the films are enticing for their outlandishness but present no digestible philosophy.

After the wild cult success of his mystic and surreal early films, Jodorowsky decided to take on a new project: turning Herbert’s Dune into a film. Jodorowsky’s Dune, directed by Frank Pavich, chronicles the attempt and failure to realize this project in fascinating detail, doubling the audience’s regret that Dune was never made.

But, rewind: the year was 1974 and the time was right. Jodo, as he is known by his former colleagues interviewed in the documentary, was popular in art circles, he had the funding, the vision, and more than enough energy, and soon began amassing a team of, in his words, “prophets…and warriors to change the world.”

Jodorowsky’s Dune interviews these said-warriors, showcases their work, and highlights how magical the process ofDune’s pre-production was. They—notably all men—are nerdy, awkward oddballs, and very talented in their own realm. It was Jodorowsky’s impassioned encouragement that brought their life’s best work out, as many of them acknowledge.

Beyond the stories of the participants in this three-year attempt at making Dune, the film shows a world begging to be put to film. The illustrator Moebius’ intricate storyboards and the planet of the evil Harkonnens, designed by the undeniably eldritch H.R. Giger, stand out. In combining story and imagery and music, Jodorowsky’s Dune succeeds on many levels.

In fact, it’s an adept piece of documentary filmmaking. The music is tight, the imagery smooth, the cinematography clean – only once is it slightly out of focus as it zooms out to capture Jodorowsky spontaneously picking up his cat to tickle him.

And yet—it was too perfect. What a criticism—too perfect? But for a story about the creation of Dune—a story of a secret meeting with Dalí in the St. Regis hotel bar in NYC under the 8-by-30 foot Maxwell Parrish painting of King Cole farting, a story of chasing a retired, huffing-and-puffing obese Orson Welles around the bistros of Paris and hiring him with payment of unlimited ambrosial catering from his favorite bistro (the gourmand swallowed the bribe like a draught of expensive wine with his coq au vin)—the presentation was too divorced from reality, technically flawless, and boring.

I wanted messy, strange, quixotic, like Jodo’s story. I wanted young Jodorwsky, wild haired, throwing himself into new characters and around the city with strange friends.

But just like the vast phantasmagoria that was—and would have been—Dune, the movie, this version of Jodo was not sustainable. After the failure of Dune, Jodorowsky formulated psychomagic, a practice based in Tarot cards and zen buddhism. Psychomagic asserts that a symbolic act, like hypnotism or even more active, risible spectacles, can be taken as fact by an unconscious mind, and therefore heal internal conflict.

Dune as Jodorowsky planned it never came together (David Lynch made an embarrassingly mediocre version in 1984—not good enough to deserve praise, not bad enough to become a cult film). And yet, the symbolic act of the two-year compilation: planning, sketching, modeling, has been taken as fact by Jodo’s unconscious (and conscious mind, too).

Jodorowsky has moved beyond the wave that peaked at Dune, and this documentary does too. Perhaps the clean editing and sharp image are the zen version of maturity, adulthood, where we can enjoy and learn from the wildness of youth from a safe distance, like looking through the scrubbed-clean glass window of Jodo’s Paris apartment at the street below, where Jodo once ran, wild-haired, with Mick Jagger and Salvador Dalí, shouting about madness and art as loud as he could. 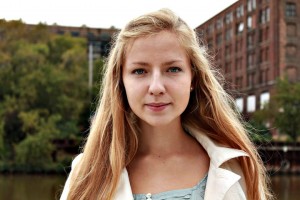 Emilia Brahm is a writer of journalism, criticism, and fiction. She currently studies at Georgetown University, where her academic focus is Gender Studies and Urban Agriculture, as well as Polish and Arabic Language and Literature . Her work can be found at http://emiliabrahm.wordpress.com/ and in the Georgetown Voice.

This article was selected as a finalist in the 2014 DC Student Arts Journalism Challenge, an annual competition designed to identify and support talented young arts writers.