Why I Struggle to Make Photographs by Andrew Zimmermann 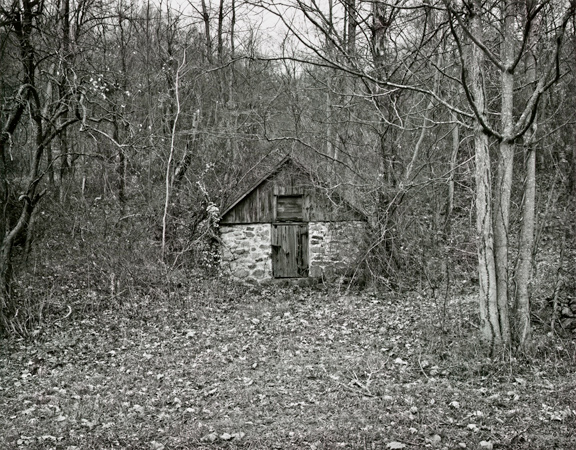 I work with a large format camera, a heavy steel contraption that is older than I am, which puts images onto 8×10 inch sheets of film. With my tripod attached, the camera weighs about 40 pounds, and people often ask me why I bother using this sort of camera. To keep things simple, I often tell them that I love the sharpness and dense tonality of the prints that are ultimately produced from such big negatives, but honestly, this is only about half the truth, and not the half that really matters. The real truth is that the most essential thing I get from my enormous camera is focus—not in the sense of lenses and light but in terms of my own attention. The large camera helps me focus, and see. 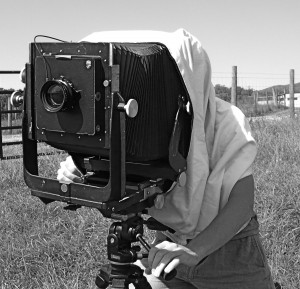 For me to produce an image, I carry my 40-pound camera—which I prop over my shoulder, like an old musket—through the landscape until I find something that seems relevant to me. I then set up the camera, and focus it with a dark cloth over my head. I calculate an exposure based on the available light, and then shoot, exposing a single sheet of film, which I eventually develop by hand in trays of chemicals in my darkroom. After the negative is produced, it has to be printed, which involves several hours in the darkroom. I also perform several campaigns of hand-work on each print, first with a solution of reducer (or “bleach”) applied with watercolor brushes in order to lighten areas of the print, and then with neutral watercolor to add tone and texture to areas of the image that I still feel need adjustment. Creating a single print involves at least 8 hours of my time, and sometimes considerably more. This whole lengthy process is always in my mind as I look for my next photograph, and it forces me to make choices, to decide what I think is really important and what is really worth capturing.

In this day and age, when one can take a photograph with an iPhone and moments later post it to an online album or print it out on a desktop inkjet, spending 8 hours to create a photographic image may seem like an absurd difficulty. But I feel that this difficulty adds something fundamental to my work. Things that have been labored over for a long time express the care and attention given them, even if not always in an overt manner.

It’s less a question of perfection than of character— think of a chair handmade by a woodworker, or a bowl hand-thrown by a ceramist. In many ways these objects are less perfect, less seamless, than plastic chairs or bowls cast at a factory in China and sold by the millions at Wal-Mart, and yet they are so much more alive! I choose the big camera and the long process because for me, the difficulty of working with this equipment and these materials parallels the difficulty of struggling to truly see—and truly appreciate—the world around me.

I recently completed a series called “Ways to Lexington”, which is a group of landscapes of the Shenandoah Valley made more or less in response to the recent decline and death of my grandparents, who lived in Lexington, VA since before I was born. I had initially intended the work to portray my bright recollections of the landscape around my grandparents’ old farmhouse, but the events taking place in my life at the time ended up seeping into the work and coloring it in somewhat darker tones.

I am engaged in the physical and technical photographic process because through it I am able to share a part of myself that really sees with whoever cares to look. Every series is different, but they are bound together by an attempt to look at the landscape and find something in it that is both particular to me and engaging to others.

Andrew Zimmermann is an Arlington, Virgina based photographer who works with large format cameras. His work has been widely exhibited around the Washington, DC area and in numerous venues throughout the United States. He recently received a Professional Fellowship from the Virginia Museum of Fine Arts for his body of work “Common Place”, which documents the landscape within one mile of his suburban home in Arlington.

To see more of the artist’s work, check out his website: www.andrewzphotographs.com