Art is a Story by Megan Coyle 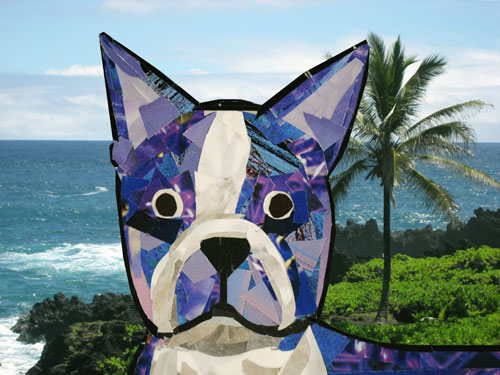 As a collage artist, I’m drawn to storytelling with images and words. I decided to pursue a career as a visual artist after majoring in creative writing and painting in college. Since graduation, the majority of my time has been dedicated to honing my collage technique – which I call ‘painting with paper’ – where I use a palette of magazine strips to create compositions that resemble paintings. Earlier this year, I combined my visual art and my interest in storytelling and wrote my first children’s book, Duck & Fish.

Duck & Fish began as a series of sketches on note cards. I spread the note cards out on the ground so I could visualize and play with the narrative as a whole, and then wrote the story to accompany the images. When it came to revising the book, I went back to my illustrations (that I previously thought were finished) and edited and reworked them several times. The writing itself underwent numerous revisions as it was passed around a small circle of friends for edits and insight. Finally, after a great deal of bouncing back and forth, from editing text to seeing if it properly described my colorful collage illustrations, I finished the book.

The storytelling process for Duck & Fish has really influenced my current projects, which include a series called “The Adventures of Bosty”, and a collaborative collage animation. With The Adventures of Bosty I’m Photoshopping a collaged Boston terrier into photographs taken from various trips around the country and world, and I write about Bosty’s adventures next to the images. At the top of this article is a recent picture of Bosty  and the text that goes with this one is: “It was getting cold in DC – so Bosty boarded a plane and flew to Hawaii for the week. He sent plenty of pictures of all the fun he was having. Here he is enjoying the bright blue skies while posing next to a palm tree.”

Moving back and forth with drafting and revising illustrations for my first children’s book has influenced my art-making process. With my current series of collages I find myself revisiting the piece to refine and edit the narrative of each subject. Creating my own written story, for Duck & Fish, I was forced to think more about conveying a very specific storyline instead of just focusing on a general idea. Representational art is like a story in many ways. Scenes and sitters can convey different ideas for a work of art. Since I depict familiar scenes, animals, and a variety of sitters, viewers can look at a collage and think about what might be happening in a given image. It encourages them to tie the work to their own memories and experiences. I’m looking forward to continuing to develop new books, as well as fine art projects, and I feel like the two are reinforcing each other.

Megan Coyle is a Washington, DC area artist who makes collages using a technique she calls “painting with paper.” Her children’s book Duck & Fish is illustrated with paper collages and tells the story of a duck and fish that switch places for a day to explore new wondrous worlds of ocean and sky. She is currently working on a new body of work of animal collages for a solo exhibition next year in the Alexandria City Galleries.