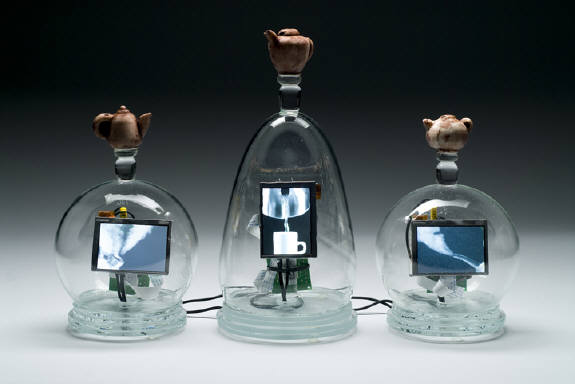 In June 2011, we will celebrate the 10th anniversary of the Washington Glass School, and this year we reached the milestone of 4000 students since we opened. It seems almost impossible that so much time has gone by so quickly. 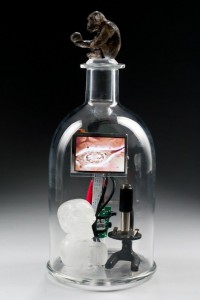 When I started out in the late 1980’s, the art world presented a hugely different terrain than it does today. In those days, there was one primary path. An emerging artist would try to be noticed by a local gallery, which, if the artist were lucky, would represent him/her in that geographic region. Ideally, one would find several different galleries in different regions, striving for a New York gallery one day. If a gallery had contacts with a museum curator, perhaps it could get them to notice your work. The art world was full of gate-keepers – gallerists, curators, writers –all dominated by a small number of very knowledgeable people who had their own stable of familiar and talented artists. It was very tough to be noticed from the outside.

In the 2000’s, things began to change radically, precipitated by the rising popularity of large art fairs such as ArtBasel, SOFA Chicago, Scope, and Frieze. At the fairs, galleries pay for booths and present their best artists’ best work. The biggest collectors attend, bringing all the right players to the same place at the same time. Instead of just geographic exclusivity, now artists have to concern themselves with show exclusivity as well. (If a gallery is bringing you to Frieze, they don’t want another gallery bringing you to Frieze as well.) Throw in the internet, and the business terrain for artists is pretty complex.

When I first combined video and sculpture 4 years ago, it was mostly because an art critic had casually said that he believed my future would be in that direction, which actually made me focus on it. My first two very low-tech video pieces were immediately bought by museum collections (one is currently on display at the Renwick Museum here in town) and as I continued developing and re-developing the work, I was suddenly courted by galleries I’d only dreamed of. This year, I started doing collaborative work with other artists, and I have also begun to make series of works as a single piece. (Like the Seven Deadly Sins, pictured below.) Making a series as a single piece has expanded my scale, and the interest of museums. My pieces by themselves are quite small – almost too small for a large gallery space. The series are much larger, and engage viewers for a greater amount of time. 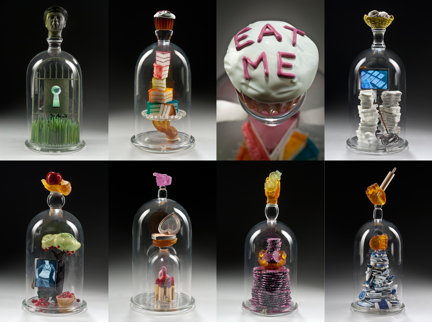 Utilizing Facebook has been a big change, and a big ally, in my work. It started, as all good Facebook stories begin, with a video of a cat playing the piano. (I posted the video to my profile – I’m not proud. I thought it was cute.) After several comments, someone popped up and said, “How cute, I should get them here at my museum.” “Museum??!!”, I said, “What museum? You should have my work there!” 24 hours later, I was in a show at the Museum Of Art and Design in NYC called “Dead or Alive” with Damien Hirst and Nick Cave. The man who commented was the Chief Curator and Director of MAD. I pitched an idea, he ran it by the curatorial staff, and I was in. The show runs till October 15th, 2010.

It was then that I fully understood the biggest difference between today’s art world and the one I entered: access to gate-keepers. Gallerists, curators, collectors, universities, all were open to me without an intermediary. I started really putting myself out there on Facebook and quickly had over 1000 friends. When I posted the image of the 7 Deadly Sins, the gallery that was taking me to SOFA/Chicago more that doubled my wall space to 50 feet, which is a huge investment in my work on their part. I have used Facebook to sell work, get west coast galleries, entice museums and get speaking engagements. 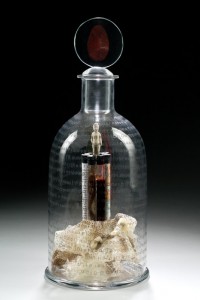 I met a man at a party who said I should apply to be a Fulbright Fellow. It seems that artists are exempt from the PhD requirement. One of my partners at the Glass School, Michael Janis, and I both applied. We just learned that we have both been granted Fellow status. Next, we find a university overseas to invite us to teach a workshop; three have already expressed interest.

A few months ago I got another surprise: I was offered my first museum solo — and it is for video alone. This year I will focus heavily on videos with no glass structure at all. I will also be working with Rob Bettmann and his new dance company in a performance called Quis Custodiet, which will use some of my video projections.

As I look back, what I am proudest of is not my individual achievement, but my work with the Washington Glass School. We are currently the second largest warm glass school in the country, and next June the Longview Gallery will host a retrospective featuring over twenty of the artists who began with us that have gone on to national and international renown. The influence of the Washington Glass School Movement has become international, as narrative sculptural glass artists around the world recognize the Washington Glass School as a major creative hub. I encourage artists in all media to come to the school and see the variety of medium we teach there. It might surprise a few to see how we can help. And if any artist reading this can think of a way we can help, give us a buzz. It would be our pleasure.

Tim Tate is co-founder of the Washington Glass School located in Mt. Ranier MD. He has shown extensively in this area and beyond since the 1990’s, including the Museum of Art and Design in New 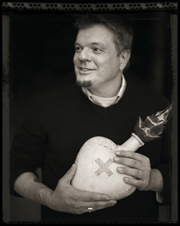 York, SOFA New York and Chicago, Art Basel, the Red Dot at Art Basel-Miami, the Luce Foundation Center for American Art at the Smithsonian, the Renwick Gallery and commercial galleries from Washington, DC to London and Berlin. His awards include “Rising Star of the 21st Century” from the Museum of American Glass, the Virginia Groot Foundation Award for Sculpture, three Artists Fellowship awards from the DC Commission on the Arts and Humanities and the Mayor’s Art Award. His work is in the permanent collections of the Smithsonian American Art Museum, Renwick Gallery, the Mint Museum, the Katzen Art Center of American University, the University of Virginia Art Museum and Vanderbilt University. For more information, see www.washingtonglassschool.com.