Alive to the Possibilities by Jessica Beels

Following a traditional track toward museum curatorship, I studied art history (17th-century Dutch genre painting) as an undergraduate at Harvard University and later got a masters degree in Early American Decorative Arts from the Winterthur Program at the University of Delaware. My first post-college job was with the Smithsonian.

All along, however, I was working with my hands, almost obsessively accumulating at least a passing familiarity with as many media as possible. I have always knit, embroidered and collected sticks and vines to make into baskets. In high school, I learned theater costuming and set design, had a summer job with a cabinetmaker, and learned to work with silver and enamels. Right after college, when I moved to Washington, DC, I learned spinning, took classes in figure drawing and stone sculpture carving, learned to throw pots and honed my silversmithing skills.

In 1995, when my daughter had just been born, I left my editing job to stay home with her and try to make a living making art. I had fallen in love with sculptural beadweaving, exploring the three-dimensional possibilities of weaving simple cylindrical glass beads into complex hollow and undulating forms. The experiment worked, and my primary occupation has been as an artist ever since.

In 1998, while pregnant with my son, I craved a last hurrah before going “under” for the next two years. I wanted to work on a large scale, but I obviously couldn’t haul large hunks of clay or metal around, so I signed up for a two-week class in paper sculpture with Jeanne Jaffe of the University of the Arts, at Haystack Mountain School of Crafts. There, I fell in love again with a new media and a new technique, draping flax pulp, which shrinks tight as it dries, over armatures. I delight in the possibilities offered at every stage of this process, from building the armature, to making the paper sheets, to surface treatment, to how the paper distorts the form as it dries and then changes color and texture with final surface treatments. I also love that the medium so clearly expresses its formal possibilities. It is hard to achieve those curved and shrinking forms any other way.

The next couple of years, most of my time was spent raising my kids and working with the more contained medium of bead weaving (large vats of stinky water and toddlers don’t mix very well). But after a few years, I found a local paper artist, Ellen Mears Kennedy, who let me pick her brain and work with her while I decided where I wanted to go with the medium. 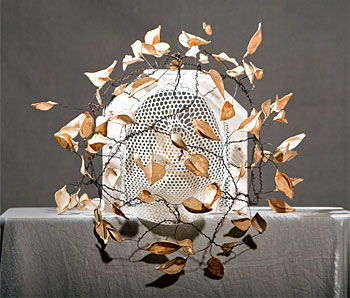 About three years ago, I switched from showing primarily beaded work to focusing on handmade flax paper shrunk over armatures. I make both jewelry and sculpture. Often, I print the wet paper with inks and paints and, when the paper is dry, infuse the surface with wax to seal it and enhance its translucence. I am intrigued with how the opaque and sometimes reflective quality of the inks contrasts with the glow of the paper fibers. Recently, I have been making ungalvanized steel armatures and experimenting with sealing in the rust resulting from the metal’s contact with the wet paper and ambient humidity.  I am also beginning to make larger pieces again. There are few intrinsic limits on the size that can be achieved with this lightest of media.

Alexander Calder’s work is a major influence for me, with his sense of play and irreverence for material coupled with his love of simple fluid form and composition. True to my art historical beginnings, I still love 17th-century Dutch paintings, with their focus on everyday objects, and the memento mori theme of many still life paintings. The twisting lemon zests, skulls, bugs, and shells of this work feed into so many aspects of my imagination.

In almost every medium I’ve pursued seriously, I have drawn from my fascination with biology, particularly microscopic organisms, and math. I love the sense of timelessness of fossil forms – how nature produces mathematically stunning forms. They are often imperfect – but they refer to pure math – symmetry with blips and crinkles. I try to capture the feeling that you are seeing something in transition, a phase of an organism, a growing being. Sometimes my work is about transience and decomposition, and sometimes it is about growth and evolution. I explore interior spaces, how an exoskeleton or skin reflects the absent organism that grew it and grew in it. 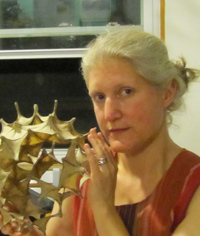 Jessica is an Associate Artist at the Torpedo Factory in Alexandria, VA, and will have a studio at Flux Studios in Mt. Ranier, MD, starting in August 2010. Her website showcases her jewelry and sculpture and lists upcoming shows and classes. She also writes a blog about artists reusing and recycling materials.

On July 8, she will be featured in a trunk show at the Neptune Gallery in Bethesda. In September her work will appear in a group show at the District of Columbia Arts Center (DCAC) and in May, 2011 she will have a solo exhibition at the Black Rock Center for the Arts in Germantown, MD.

She exhibits and sells her work at juried craft shows and galleries from Maine to Kentucky to Virginia, and many places in between.Upcoming shows include the Westchester Craft Show, October 15-17, 2010, the Washington Craft Show, November 19-21, 2010 and Craft Boston Holiday, December 10 – 12, 2010.