This is a Live Feed With Glass Artist Tim Tate 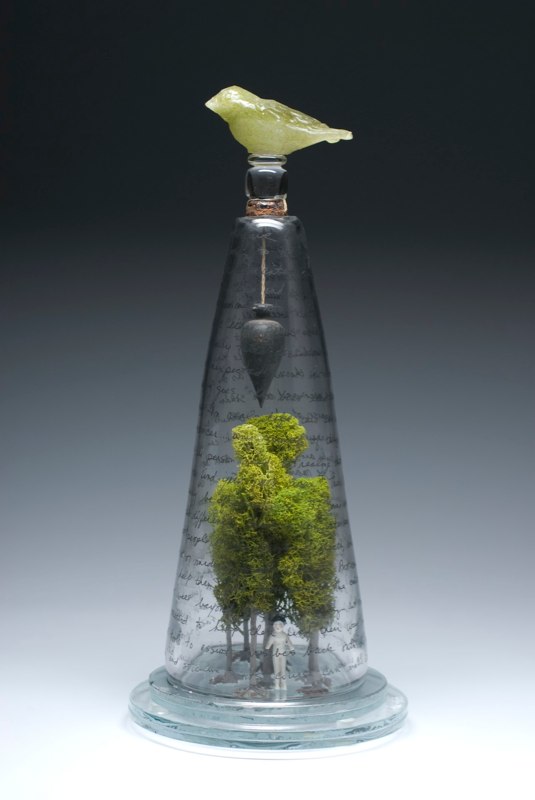 [Editor’s Note: On May 3rd around noon I saw that Rosetta DeBerardinis had updated her facebook status with: “This is a live feed with glass artist Tim Tate who is also the founder of the Washington Glass School. Welcome, Tim and thanks for doing this interview.” As the conversation below unfolded, I sent her a note asking if we could publish this on Bourgeon.]

Rosetta DeBerardinis: This is a live feed with glass artist Tim Tate who is also the founder of the Washington Glass School. Welcome, Tim and thanks for doing this interview.

Rosetta DeBerardinis: Tim, you have work currently in a major museum show along with Damien Hirst, I read the review. What is your impression of the show?

Tim Tate: The show is a very non-Washington show. It tests the limits of media specific work, and allows artist who normally would be outside the museum system to show work. I would say its one of the most exciting shows in NYC right now.

Rosetta DeBerardinis: You mentioned during our last chat that you were discovered by the curator at the Museum of Art and Design on Facebook. What did his initial correspondence say?

Tim Tate: The way I got the show at the Museum Of Arts and Design in NYC is through Facebook. I posted a video of a cat playing the piano, and a person popped up and said, “Hey! That’s really cute…. I should have that at my museum.” I said “museum???? You should have my work….. what museum??” That man was David McFadden, Chief Curator at the Museum of Arts and Design. I pitched a concept and 24 hours later, I was in a show there.

Rosetta DeBerardinis: What was your pitch?

Tim Tate: It was called “The Apothecarium Moderne.” It consists of 9 large apothecary jars, each offering a cure for an ill of modern mankind. I sent him a sketch of the piece.

Rosetta DeBerardinis: Was the work site-specific?

Tim Tate: It was….. specifically designed for this show. Fortunately, my work was already similar to this theme. It also gave me a chance to collaborate with one of my favorite artists. 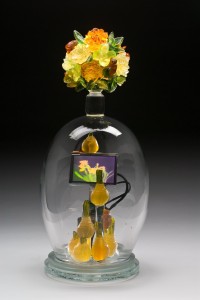 Rosetta DeBerardinis: What makes this the most exciting show in NY right now?

Tim Tate: Its got some incredible artists, including Tom Wilkinson, Sanford Biggers, Xu Bing, Nick Cave, Damien Hirst many others. Plus some very awe inspiring work.

Rosetta DeBerardinis: You usually use reliquaries, what made you decide on apothecary jars?

Tim Tate: An apothecary was just a different shaped vessel. I was already used to the dialogue proposed by inclusion inside a vessel.

Rosetta DeBerardinis: Did you have a chance to have exchanges with those artists while working on your pieces?

Tim Tate: I only met a few, as I installed early. But they were all wonderful.

Rosetta DeBerardinis: Did you get a sense of how they perceived the Washington art market?

Tim Tate: Well, it appears that DC is very low on the radar. But no one spoke badly of it.

Rosetta DeBerardinis: Glad to hear that. Where are most of the artists from?

Tim Tate: In this particular show, most are European. Many had to install late because of the volcano. One missed the opening entirely.

Rosetta DeBerardinis: Let’s go back to some of your earlier work. How does your current work transition from your maps of the human heart?

Tim Tate: What were my large hollow hearts but reliquaries? I see them as very similar.

Rosetta DeBerardinis: As I recall, your hearts were related to your mother’s death. If that is true, what event triggered your inspiration? 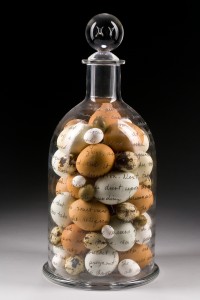 Tim Tate: Most of my early work dealt with loss and memory. And was extremely self referential. When I added video, memories of early childhood and nostalgia came into my work. My newest videos will be based on turn of the century spirit photographs…

Rosetta DeBerardinis: Glad you mentioned your videos. Do you actually make the video?

Tim Tate: I make 80% of the videos. I also rely upon found videos or public domain.

Rosetta DeBerardinis: Did you decide to incorporate video to keep your work contemporary, responding to the new media?

Tim Tate: Nope. Didn’t even think of that till after the fact. It started because my aunt left me a miniature tv from the sixties…. I wanted to use that. I made 2 prototypes. One went straight to Cy Katzen. Plus I sold 4 more…. on the same day. Then I got scared.

Rosetta DeBerardinis: Why were you scared?

Tim Tate: I knew my prototypes were way too low tech for museum quality (dvd player under a box). I spent 8 months redesigning the electronics to make them conservation worthy… No moving parts…..all done with micro chips.

Rosetta DeBerardinis: That’s impressive. Now, how does the video play inside?

Tim Tate: Flash drive/ micro chips. But something else also occurred. The intellectual property of the work switched from the glass to the video.

Rosetta DeBerardinis: Is the video more valuable to the work than the glass?

Tim Tate: Its not that, its that the focus is now on the video content, rather than on the color, shape, size, and materiality of the glass. 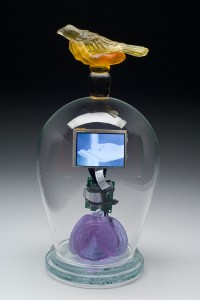 Rosetta DeBerardinis: Do you consider abandoning the glass entirely?

Tim Tate: I doubt it, but at Scope in Basel, Switzerland in June they will only be showing the videos….. no containers….. same in San Francisco. The way I use video is starting to become an art form.

Rosetta DeBerardinis: Why do you think that is happening?

Tim Tate: I saw a show in South Africa that was 80 videos artist in 80 seconds. It was artists who work in 80 seconds or less. It was the first time I had seen others like me. The availability of editing, youtube, cameras………you will see more and more.

Rosetta DeBerardinis: And….. what about that made you decide to abandon the glass?

Tim Tate: I haven’t abandoned that at all. The venue determines which way I present the work.

Rosetta DeBerardinis: I agree! You mentioned being “scared”. Are you sometimes frightened by your recent success?

Rosetta DeBerardinis: What do you attribute most to your uprising career?

Rosetta DeBerardinis: Will you miss working with glass less often? 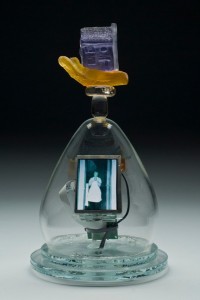 Tim Tate: I work with glass constantly…. I will always want to make work with my hands. But now my work represents the entry point to video for many collectors. Plus I can expand what I can say so much more.

Rosetta DeBerardinis: Do you have any advice for Washington artists based upon your growth and experience?

Tim Tate: Try to select galleries that show in the major fairs. A huge percentage of artwork sold today is at the fairs.

Rosetta DeBerardinis: How important a role do you think galleries have contributed to your career?

Tim Tate: A huge role. The saddest moment is when an artist outgrows a gallery. It’s a tough time on both of them.

Rosetta DeBerardinis: I am sure that’s true. Would you consider leaving the Washington area?

Tim Tate: Not even remotely. I have deep roots here. I founded the Washington Glass School…. that will end up being my legacy. But these days an artist can live anywhere on earth. You are not limited to your proximity to a gallery any longer. I’ve had galleries in Chicago, Miami, Los Angeles, London, Germany, New York…. all over.

Rosetta DeBerardinis: Well, you have made us all very proud. Anything you wish to add?

Tim Tate: I would add to each artist…. try to find a group of artists whose work you respect. Form a “covenant” with those other artists. Each will help the other. This has been extremely advantageous. There are so many wonderful artists in DC.

Rosetta DeBerardinis: Good advice. Thank you for your time and wishing you continued success!

Tim Tate: Thanks Rosetta! Hoping to see you soon moving to my neighborhood!

Rosetta DeBerardinis has exhibited at commercial galleries and art venues throughout the Washington metro area, Richmond, Dallas, New York City, Houston, New Jersey, Delaware, Michigan and internationally in Croatia, Madrid, Beijing, India and France. She has shown at the Dallas Women’s Museum, The Corcoran Gallery of Art, the Woman’s National Democratic Club, The African-American Museum in Dallas, the City Museum of Varazdin in Croatia and the Yaroslavl Art Museum in Russia. Her work and words have been published in Washington Spaces magazine, the Virginia-Pilot Ledger Star, SoBo Voice, Radar Redux magazine and u-tube, Thinking About Art:The One Word Project, the Hill Rag, Voice of the Hill and in catalogues with comments by art officinados like Doreen Bolger, Director of the Baltimore Museum of Art. A recent work is part of the Art on Call public art project in the Trinidad neighborhood in the District of Columbia. To see her website, click here.