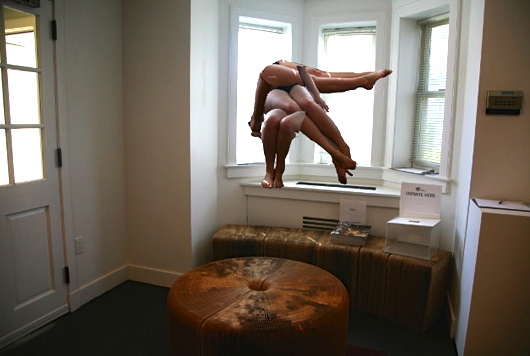 Curator (and Bourgeon Associate Editor) Blair Murphy interviewed Chajana denHarder about the artist’s upcoming show at the WPA, Oneness, Shock and Return, on her blog. An excerpt:

“The work itself defies easy categorization, involving performances that occur without an audience, photographs that depict imagined sculptures and finally, the metaphoric consumption of the artist herself. The final images are a documentation of denHarder’s stated desire to merge with her surroundings, just as the ritualistic consumption of the bread invites onlookers to merge with the artist. At the same time, the work ultimately testifies to the stubborn persistence of boundaries, our inability to be at one with either our surroundings or one another in anything but the most fleeting and symbolic of ways.

I spoke with denHarder this week, as she prepared to install the show and put the final touches on her bread alter ego. The show opens this Friday, May 7 from 6-8pm, with an artist’s talk and consumption of the artist/ bread at 7pm. The exhibition will remain on view at WPA headquarters through June 4.

Chajana: It is important. When I perform I’m trying to connect, but I can’t fully realize that connection until I digitally merge the two together. The upcoming WPA show is the first time my work has been reinserted into the setting in which they were created/conceived. In doing this, I feel that it somehow completes the process.

Read the full interview here. To see more about the upcoming show at the WPA, Oneness, Shock and Return, click here.