Laura Shapiro: What is Dance? 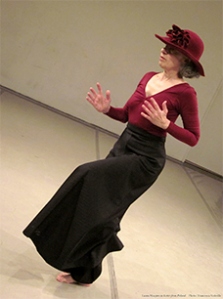 To define something is to set limits or boundaries, yet many practitioners of the elusive, ephemeral medium of dance, especially in a restless, novelty-driven culture like ours, often seek to break through and go beyond the limits and boundaries of precedent and propriety. One dictionary defines dance: “to perform (make, do, accomplish), either alone or with others, a rhythmic and patterned succession of movements, commonly to music,” with the etymology of music coming from “any art over which the Muses presided, especially music and lyric poetry set to music.” These definitions notwithstanding, some dance is created and performed in silence, and some contemporary dance appears to have been created without any discernible rhythms or patterns. Interestingly, some cultures only have one word for what we call music and dance. For them sound and movement are facets of the same thing, usually involving religious, social or political ritual, rite or ceremony. For me–as a choreographer, performer and teacher–dance is as essential to everyday life as breathing and nourishment, enabling me to mediate the experiences of physical and non-physical reality in performance and practice.

Laura Shapiro‘s independent artistic journey has taken her from New York to the Northwest, Asia and Europe. The consummate simplicity of her movement style is informed by decades of extensive study of traditional and new, Eastern and Western approaches to alignment, energy and awareness, which she now also teaches. In the New York Times, Jack Anderson described her work as having “access to magic powers,” and Jennifer Dunning wrote about her “compelling presence,” “enjoyable feminist wit,” and that “the simplicity of her theatrical touches was just right for the development of those themes.” In Attitude, Nefretete Rasheed concluded that “The power of Shapiro’s work seems to lie in its ability to suspend and sustain us in countless yet singular, incisive moments of movement.”  See www.quicksilverdance.wordpress.com for more information.