Tehreema Mitha on “The Scent of My Earth” 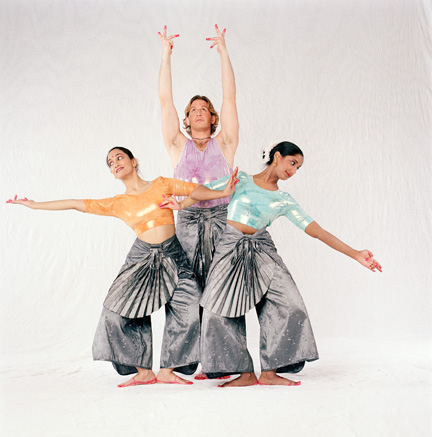 I believe in Aamad. Aamad can be translated as divine inspiration that results in creativity in a moment. When that vision descends on me, the excitement and urge to move almost takes my breath away. I still craft must craft my work, however. I work on dances in many different ways. There is no particular formula except that the story, the topic, the concept always comes to mind with movement.

When the inspiration arrives, I can barely wait for a chance to get into the studio and see how things will look in reality. I do not work in a systematic order, with a beginning then middle then an end. Instead I work on small sections that I connect later. Each piece is part of the story but I enjoy leaving those links until I know it is time. So far, I have never worked within a given time frame for the whole dance, choreographing till I feel it is done and I have nothing more to say, at that point, in that dance, on that topic. Some dance items may be twenty minutes or ten. I never know for sure till it is done. Sometimes my initial estimate is wildly off the mark!

I choreograph with concentration on a particular dance and then, almost mid-way, I will put it away to gain some distance before going back to complete it. I tend to work on more than one piece at the same time: usually one classical, the other contemporary; together yet separate; emerging from the same base but radically different in approach and movement. One thing always stays the same: in every new dance I challenge myself, either to be creative within boundaries I myself set up, or to explore unknown territory with abandon. 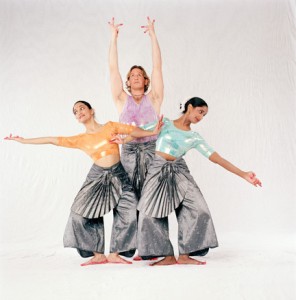 In 2003 I began work on a quartet based on the four elements: water, air, fire and earth. In each dance I have experimented using pure Bharatanatyam technique to create an atmosphere, veering away from story telling or the normal exacting formats laid out for technical dances. Bharatanatyam is either a soloist’s style or a traditional dance drama form. Using an ensemble, and multi-layered choreography I move the classical technique into contemporary presentation.

The first dance was on water, titled Leher, which translates as “On The Tide”. It premiered in June 2003. In creation I felt swept away by the mysterious sea and I chose that time when the tide comes in, the sea’s growling, surging grey power, with the last glimmers of the fading sun shining and splintering the silver on the surface of the water into so many colors. I imagined this water touching on the beach in straight, oblique or staggered lines, little pools of water making round patterns in the sand. For Leher I chose the traditional 16 beat rhythm to start with, with gentle melodious tabla and sarod to go with it. The dance was set to Raag Shyam Kalyan. The dance progresses to the unusual 131/2 beat rhythm to evoke the unexpected depth of the movement of the water. Leher was premiered with seven dancers, and will always need an odd number of dancers, no less than five.

Baad-e-Sbah – The Fresh Morning Breeze – was the next in the cycle (premiering in August 2004.) Baad-e-Shah is based on the element of air. Performed by six dancers, the piece depicts that hour which is neither day nor night and the faintest glimmer of light comes through the dark veil of the sky. Those who wish to pray or meditate or feel one with nature wake up to start their day. This fresh breeze is playful, cool, moving through the garden. I used adavus (the units of dance that form the basis of the technique of the classical style of Bharatanatyam) in very untypical combinations to create circular movements that cover space, within a dance form that is not given to pirouettes or high jumps. I set the choreography to a 19 beat rhythm to give each strand of movement a long life. For the music I asked a male vocalist with a deep melodious voice to sing the dance syllables in Raag Bhairavain, accompanied by both tabla (a north Indian instrument) and mridangam, (a south Indian instrument typical to this dance style).

In December 2007 we premiered Aatiah Angaiz- Igniting (based on the element of Fire). Set to a 21 beat cycle, this is the fastest paced of all the dances, with fiery movement darting across space and quick fire adavu combinations that make your heart and lungs leap out of your body. It is passionate, for fire is all consuming, but in the tightly controlled style of classical Bharatanatyam. With mridangam, sitar and female vocal set to Raag Deepak, the divisions are extremely varied and intricate. This dance item involves four female dancers, including myself. In Igniting I have given each dancer a brief solo, and introduced a circular relay.

Maan Mitti – The Scent of My Earth – is in progress and due to be premiered this August at Dance Place. In this dance, I use dance syllables spoken by the dancers live on stage, intermingled and alternating with foot percussion and a recording of the specially composed music. I have pledged to use no traveling jumps (as in Baad-e-Sbah), no adavus that involve kicks (as in Igniting) or those linear body movements that I used in Leher. This dance will stay closer to the earth.

The dance begins on the ground, with humming and chanting, recreating the feel of rituals from so many different cultures that honor mother earth. It then moves to hand gestures and footwork done in sitting postures (unknown in typical Bharatanatym). It keeps long slow movements, sometimes at a faster pace, using full Mur mandi positions (movements done in a deep plie).

As a small part of the dance, I gave each of my three dancers, Radha Gholkar, Praneetha Akula and Deepa Poonapam (who have been with me for several years now), a twelve beat rhythm with the first five beats already set to a certain step combination, and asked each to make up their own adavu combination for the rest of the remaining seven beats. I use these individual twelve beat cycles as part of our on stage conversation between the ensemble, taking certain distinctive movements from each and creating four more cycles of variations to add on to each original set.

More often than not, (as in all the dances of this quartet) I will complete the whole choreography with every beat accounted for and then work with a set of musicians to lay down the melody so that it literally reflects every single half or quarter beat movement. There is no formal system of notation in South Asian classical music. While we have an informal way of writing down the basics, (each note or half beat is noted on the paper), in the end we depend upon understanding and memorizing the work.

We choose the Raag according to the sounds I have in my head, or the Raags known for similar qualities as the topic, or one that we all (the musicians and myself) feel sounds just right for the rhythmic patterns. For this upcoming dance I hope to have vocals and Pakhawaj (an ancient drum that the better known tabla originated from) and maybe a violinist. In traditional Bharatanatyam accompaniment a few basic phrases with a little variation are repeated over and over again. In the late fifties my Guru, Indu Mitha, began intricate tying of the music to the dance movement, and I have taken this work further. We are the only choreographers who use North Indian music to accompany this South Indian dance style, and who go beyond using themes from Hindu mythology.

The costumes are an integral part of the choreography and add another dimension, as do the lights, both of which I imagine as part of the choreography. All the dances in the quartet have costumes that are a dramatic twist on the traditional. It is important to me that the costumes should retain that glamorous and detailed element that is part of the traditional Bharatanatyam costume, while moving forward into the 21st century. When we dance onto stage we are not ourselves; we are transformed into the character required and costumes must reflect this. While the costumes for “The Scent of My Earth” are based on the traditional every day Shilwar Kameez (trousers and shirt) that a lot of dancers wear for practice, these will include colours connected to the earth, with long decorated hair and dangling earrings.

The title of this dance comes from the scent that rises from the earth when it has just rained a little in the summer (the rain will appear in the dance as well) bringing welcome relief from the heat. I have inhaled and cherished this scent in Pakistan, India, Africa, the United States…. It is a potent part of our connection to the Earth, part of our senses, our very being.

Tehreema Mitha grew up in Pakistan in a home full of music, dance, paintings, books and lively debate. Dancing under the tutelage of her mother, Indu Mitha, since the age of seven, she performed her first full two-hour program of Bharatanatyam in Lahore in 1986. Since then, despite political and cultural obstacles, Ms. Mitha has continued to give solo performances to audiences in Pakistan, Afghanistan (December 2005), Norway, China, India, Germany, England, Guatemala and the United States. Ms. Mitha was invited to the American Dance Festival’s International Choreographers Workshop in North Carolina in 1990. She is the subject of the documentary “And she dances on…” which premiered in 1996, and toured as part of the 1997 Asian Film Festival (Europe, Asia and North America.) Ms. Mitha holds a bachelor’s degree in Philosophy and English, and a MA in Fine Arts. After running the only dance company in Pakistan for five years, Ms. Mitha moved to the US nine years ago seeking more freedom to choreograph and at present is the only Muslim woman in the world, coming from Pakistan, to run a dance company. Ms. Mitha has reviewed dance performances for The Dance Insider Online, and for Dance View Times. She has choreographed, and produced the music for over sixty dances, both solo and ensemble, in both the Classical and Contemporary styles. To these she adds a repertoire of yet more items that have been passed down by tradition.