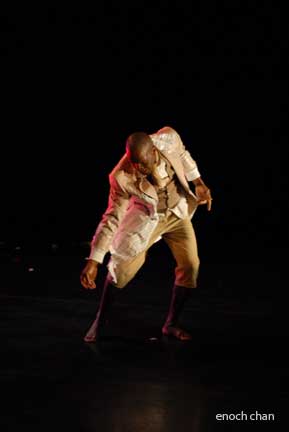 Rob Bettmann–  Vincent Thomas, in addition to teaching at Towson, your choreography career as director of VTDance is taking off.   You recently returned from performing at the Edinburgh Festival.  You’ve had a number of years working as an artist, and I know it’s something you love to do.  And I was wondering if you could tell me about a favorite experience you’ve had working in the field?

VT –  Well there have been many favorite experiences.  But you know one that stands out is: I had been performing at the Goose Route Dance Festival in West Viriginia, Shepherdstown, and there was a lady who came to this pre-show lecture about text and movement.  And she was expressive, but not so much a mover.  Had a strong interest in dance.  After the talk, she came to me and said: “I don’t understand!”  She wasn’t a dancer, she was a writer, but was really intrigued with how text informed movement, and movement text, and she said, “I wish you could give me another example.”  And I told her – the show is in like ten minutes – ‘hopefully it will be clearer when you see the work!’

And at the end of the show I was in the lobby selling t-shirts and greeting people and whatever.  And she came in to me with a well of tears in her eyes and said, “I got it, I got it.”  That was so powerful.  Foremost I think she was emotionally moved by the content.  What the dance was about.  Which was a portion of the “Grandmother Project”.  One window that people can come in through is their personal stories.  Everyone can relate to having a grandmother, or a figure within their family that was a matriarch for the family.  And what has been really beautiful with this project is that there are so many similarities between the stories that I hear – nationally and internationally. The slogan for VT Dance is “Universal, Tangible, Essential.”  And I feel with the Grandmother Project, and with the experience in Shephardstown, that we get there.