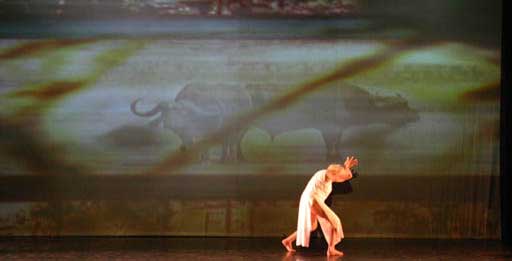 As the funeral procession passed the red brick home on the way to the Salem Cemetery, the child, standing and watching from the porch, broke into a mournful improvised song laced with primal movement that was appropriate for the raw howling of a third- grader. The youthful erotic late-night theatrical improvisations with neighborhood girls (‘Dances to the Moon’ – a possible biblical reference to the moon turning to blood in the last days) was another strong indication that what we now call a preteen was searching for some outlet. The tap-dance improvisations in the nightclubs for conventioneers by an eighteen-year old needing a little extra cash for college in the 1950s was a sure sign of a dancer in the making?

Dancer… maybe. Artist…maybe not! At that time, art was a word greatly revered, a word reserved for the highest forms of expression. How does one move from these earliest stirrings to that lofty place? Continuing…

Of course there were the weekend classes with LaVaun Turner (LaVaun Turner School of Dance – fifteen minutes each of acrobatics, ballet, jazz, and tap dance.) It was just three years of dancing before the dancer was teaching. Initially children as young as three years old – ‘I can do, I can do, yes I can do the boogie woogie woo!” At first the dances were repetitions of dances taught by Ms. Turner or pulled from a manual/card index, but soon, it was easier for me to make up dances at that moment with the children as collaborators, dances that more truly reflected the creative potential of the children than did cute dances for girls with adult sexual innuendoes. Collaboration was not a word in use at the time…. That would come later as a process of artistic interaction with other artists who were as interested in experimentation and innovation as I was.

As with many modern dancers who come from places other than New York City and the major cities of America my training as a modern dancer (perhaps more accurately a postmodern dancer) had begun, and a point of view of dance as an art was being developed/exercised. At that time, many who were determined to dance began dancing in such simple, yet fulfilling, circumstances. The expansion in America of modern dance and other forms of dance had not yet taken place.

Conventional wisdom dictates that ‘training” for dance is connected to an unquenchable need to move, a trait shared with fine athletes. It is true that this need drives most of us who insist on dancing, regardless of the general public’s disinterest and/or disdain for such insistence. Love of moving, love of expressing my life with all its intellectual and emotional journeys, and love of art are the driving forces.

Our first priority is to take class, then rehearse. This was true then and is true today if we add Pilates, yoga, jogging, and other workouts. Our second, and perhaps more important, priority is a full engagement with life. That way, there is truly something to dance about. How else could a dancer like me persist in a desire and love of dancing for over sixty years? The answer to this frequently asked question is “by dancing every day.”