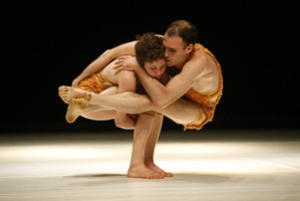 Last week I finished the NYC season for my company, Misnomer Dance Theater. A fantastic run for Misnomer, followed this month by a show in Providence, a project in Ireland, a TV pilot for VH-1, and a short dance film. It is a fruitful time to be making art.

My most recent piece is called “Toes of a Snail”, and was born out of a two-month project in Cuba, during which I choreographed on Marianella Boan’s DanzAbierta, Cuba’s leading state-sponsored modern dance company. Upon my return to NYC, Misnomer spent five months developing the piece through a process of training and rehearsal.

For me, “Toes of a Snail” looks at the connections formed between people, ranging in texture from pleasing to disruptive, as they pursue their lives in a way that remains true to them. In the “Toes” community, efforts are made, flight becomes possible, and grounding looms. The piece draws from my exchanges in Havana, where I was struck by the earnest efforts and creativity of people negotiating their lives despite exceptional and often-changing circumstances.

While riding across Cuba on a bus, I was shown a surreal state-sponsored film which repeatedly presented images of snails sliding across the streets of Havana, with people bending down to examine them closely. Reflecting on the film, I imagined the toes of a snail, an impossible detail that comes into existence only in the moment that you envision it, and then vanishes upon the realization of their improbability. Likewise, the dance conjures improbable and exceptional circumstances with minute details that become intensely real for the performers in the moment, only to dissolve and reform in the next.

Next week, my new piece “Heavy Train” premiers, and then I start work on “Throw People.” Please visit and enjoy my website: www.misnomer.org.

Chris Elam, (Artistic Director and Choreographer) graduated from Brown University and received his MFA in dance from NYU Tisch. He has been on faculty at Brown University and The State Conservatory for the Arts in Turkey, and has served as guest choreographer at eight universities. Mr. Elam’s study of traditional dances informs the technical and conceptual complexity of his contemporary choreography. In 1999 Chris spent seven months with a Topeng dance master in Indonesia, training and performing in temple ceremonies. Misnomer accompanied him to Brazil in 2001 to perform and teach. The following year, Chris taught for six months at the Conservatory in Turkey; and in 2004 he spent three months in Havana choreographing on DanzAbierta, a national dance company of Cuba. In 2005 he performed in Ireland on a European Cultural City Commission, which led to a commission in Holland in 2006 with the interactive technology group Blue Noise Dept.