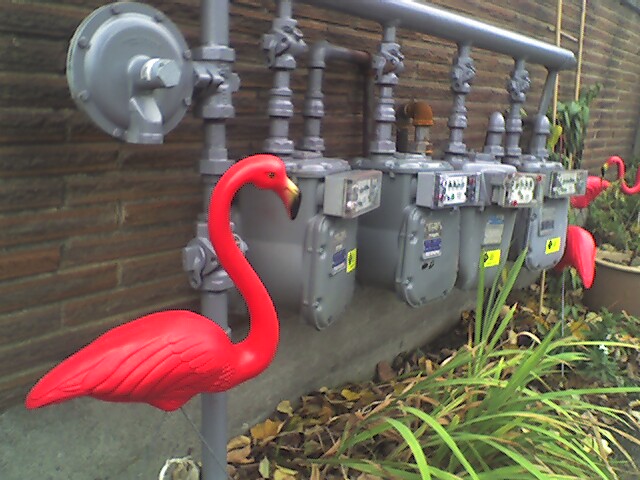 If John Waters Hung Out in Reston

He’d live in our townhouse, with the filthiest bathroom alive—

a rust hole in the sink so big it’ll leak

all over the floor if you fill it, and a

suit on our stairwell.  He’ll scare the crap

out of you if you’re not warned.  Instead of chickens

we have a family of finches nesting above

our deck.  Their bird house has a Tennessee

license plate draped, bent over the top for

a roof.  The daddy warbles from atop

in that too, right where we used to connect

the propane tank.  Johnny would love that we

could burn the whole motherfucker down.

All these animals, chirping and screwing, making

animal babies to live in this nest.  The daddy

finch has two calls—one a ventriloquist

act he does with dinner in his beak.

His other is a warning.  “Get the fuck out,”

when we’re sitting out with morning coffee.

I can’t tell if he’s speaking to the babies

or to us.  They start out shitty fliers,

dodging the owls and hawks, or the occasional

fat ass squirrel who hops from our moldy hammock

stealing food from their feeder.  In

the end, their wings grow thicker like our skin.

They leave, maybe to return, maybe not.

She lies on her back in the lake watching fireworks.

Everything about it’s illegal—the pyrotechnic

colors, the possibility of germs

In this mandredged pond.  “Yeah, it was pretty sick,”

she texts me later.  I can’t bring myself

to scold—to add my own judgment to

the current she swims against daily.  Maybe

in fall after fall, goal after goal.  So,

floating on this night of freedom, makeshift

cannons shooting chemistry high above her,

she’ll steal a moment of well. 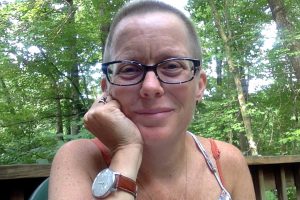 Sally Toner is a High School English teacher who has lived in the Washington, D.C. area for over 20 years.  Her poetry, fiction, and non-fiction have appeared in Gargoyle Magazine, The Delmarva Review, Watershed Review, and other publications.  She lives in Reston, Virginia with her husband and two daughters, where the recent demise of the household’s fire bellied toad has officially raised her status to fourth funniest in the family.