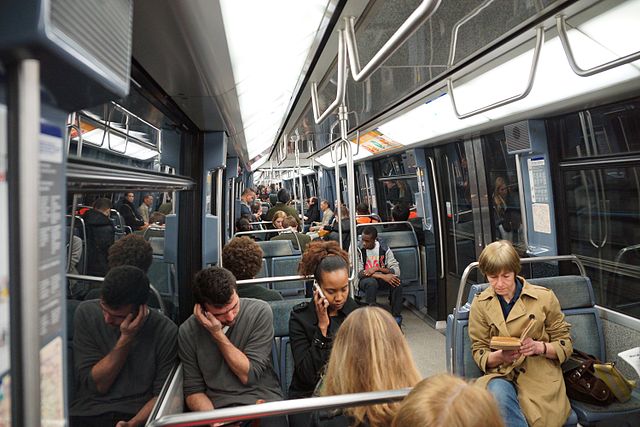 asleep on my shoulder last evening,

in the train car aswarm with humans who had tumbled in from the city,

some drunken with reddish marbles for eyes,

some wandering with no destination in particular, no home to speak of,

some weary from an enchantingly bright night,

and several weary from the delicate madness of their very existence.

this angel, vulnerable and exquisite,

a butterfly’s wing i would touch ever-so-delicately lest i tarnish or shatter it,

was blessed with creamy eyelids like twin full moons,

forbidden poetry stitched into the dark sides of them,

a ghost of a smile upon his lips,

miles of blue veins aching to burst through soft flesh,

and gangly legs emerging from scuffed sneakers, like the humble stems of wildflowers.

i murmured tales to him, at least in my head, of the surrounding creatures.

the man holding a novel had not turned a page once and was simply dreaming up puns,

lost in the glorious alchemy of wordplay.

the young woman in the diaphanous dress and soaring heels

wobbled precariously but still smiled coyly at her own reflection,

her gaze lingering for some time until the image began to melt.

she then turned away and let out a sigh of buried lament.

i then described the world beyond the glass of the window:

the golden snake of traffic gradually weaving its way through a slumberous land,

the condos in which entwined silhouettes swayed rhythmically against the bluish glow of the tv,

the houses in which perfect darkness filled every crevice like a cloud of threatening smoke, swelling in size and power with each and every moment.

utterly human i felt, nestled within this sliver of humanity,

reminiscent of a prehistoric, flicker-lit cave.

i had the urge to begin doing shadow puppets, leading a prayer, chanting an incantation,

anything, really, that would transform our unspoken sense of interconnectedness

into a tangible feast whose sweetness we could all taste.

in truth, i knew nothing of my fellow humans’ hearts or worlds

and relied on only striking impressions and my lively imagination.

i also knew nothing of the angel or his life —

his name, his age,

whether he looked more like his mother or his father,

which books he had grown up reading until he knew the words by heart,

whether he’d ever been in love.

i knew only that he was a vaguely familiar being

whom i must have encountered when i was but mere dust,

swirling about like an unquiet phantom across the noiseless universe.

nevertheless, i rode with him into infinity,

barreled into the ancient, indecipherable realm of stars and silence,

foolishly convinced that it was fate that had pulled,

gently but quite deliberately,

his head to my shoulder, 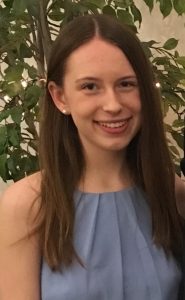 Emily Goff is a freshman at York College of Pennsylvania, studying English and Creative Writing and aspiring to one day write poetry for a living as well as teach poetry to the disabled. Throughout high school, she was heavily involved in her school’s writing center, particularly by tutoring peers and leading creative writing club meetings, and also received four Silver Keys from Scholastic Art and Writing Awards. In addition, she is part of both the Northern Virginia Poetry Group and the City of York’s literary community. When not writing, Emily enjoys going antiquing, playing viola, and volunteering. This appearance in Bourgeon is her first time being published.

Ed. Note: We are delighted and honored to be the first publisher for this very promising young poet.