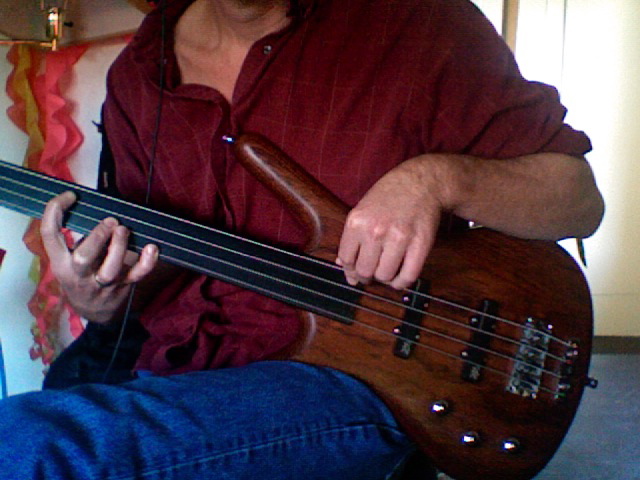 in the front row of the Crossroads Theater in south L.A.,

where Isaac, the black man, stands on stage like a submachine gun,

blasting us with Soul Vision poetry.

He fires warning shots into the air,

words so hot they make his bald scalp shine.

I am close enough to see his throat bulge when he swallows.

or papers to remind him what he’s written down.

“I am the first black president of the United States!” he howls.

His words bang against the walls, hit the back of the theater,

pound against the bold letters on the restroom doors: Brothers. Sisters.

when Rodney King was beaten by white policemen.

No one moves.  Even the jazz band

as they merge with the audience.

My daughter’s arm touches mine, but I can’t turn my head,

can’t take my eyes off Isaac, the poet,

who won’t let me forget, even for a moment,

that he has suffered, his people have suffered.

until the band gets up to play again.

There is my daughter on bass guitar:

Martin is singing, heads are nodding,

I’m tapping my foot to the swinging beat.

Isaac is tapping his foot, too. 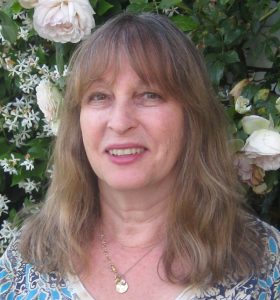 Lori Levy’s poems have appeared in Poet Lore, RATTLE, Nimrod International Journal, and numerous other literary journals and anthologies in the U.S., England, and Israel.  In October, 2013, she was featured in the Aurorean as one of their “Showcase Poets,” and her health-related poems have been published in medical and medical humanities journals, including a hybrid (poetry/prose) piece she co-authored with her father, a physician.  She lives with her family in Los Angeles, but “home” has also been Vermont and Israel.  Besides writing, she thoroughly enjoys being a grandmother to her three little grandchildren.