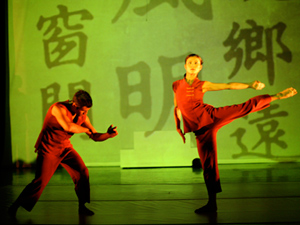 Every time I start a new dance, I look for a completely different entry point. Sometimes its musical, other times it’s story driven, sometimes about historical events, etc. I am a huge dream journal person; I have been a lucid dreamer since childhood and I keep a dream journal by the side of my bed. When it is time to start a new work, I suddenly dream lucidly and see scenes from the new dance. It’s as if my subconscious gets filled up, and then moves all the ideas to the forefront of my conscious mind. The recurring images that I have for this new piece have been relating to how I grew up, and fundamental mid-life questions of love, identity, and home.

As a child I grew up in Santa Fe, NM. I attended bilingual Spanish public school in the day and a martial arts dojo at night that was located in a Project Tibet Center. My upbringing was in some ways in a crossroads of cultures, languages, and landscapes.

The new work is autobiographical, and includes images that run through my mind daily. The new dance is also an abstract story; it explores the transitions I have gone through emotionally and psychologically to find a sense of belonging in modern day, multi-faceted America, in my 40’s. After several weeks of rehearsal I now have my choreographic structure in place, and am filling in with text and music. I’m seeing that the main character plays in a fantasy world to communicate and externalize internal conflicts.

Autobiographically: as a child, I had an imaginary friend. I became friends with “Charlie” when I was 3, and maybe still am! As a youngster, I saw the movie character “Charlie Chan” on TV and I think I based my internal life on that of the movie detective. I know that the APIA (Asian Pacific Islander American) community goes back and forth on whether he is an obsequious caricature, or an early-empowered APIA, actually based on a real life Honolulu detective. But for me, Charlie was a detective who could solve all the problems of life. He would put all the topsy-turvy disparate images of life together, and make sense of them – a Korean American speaking Spanish. My life got so confusing that the overwhelming mysteries called for a detective to decode them all! In the new dance, Charlie Chan is the imaginary friend to the protagonist. Chan has a great outsider perspective that allows the main character to give up romanticized ideals of love, and to problem solve/contemplate his own life. I am calling my new work Charlie Chan and the Mystery of Love because it is a coming of age story where fantasies live and die around the concept of actualizing love.

I am loving the process of the dance, and of working with the designers, and knowing that there is something extremely cathartic about this work. I really appreciate the phrasing, and the dancers’ commitment. I love how they go with the abstract creative process and turn it into a whole new aesthetic. I will keep you posted as the work evolves…. We will premiere the work October 22-24 at the Dance Place; if you’re free please join us April 29th for a fundraiser entitled Shanghai Nights in Dupont Circle. See www.dtsbco.com for details! 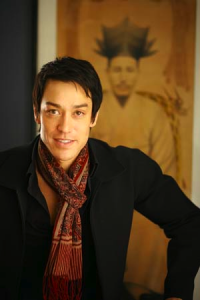 Dana Tai Soon Burgess is the director of Washington DC’s premiere Asian American dance company. He was raised in Santa Fe, New Mexico by parents who are both visual artists. He received his initial dance training from Tim Wengerd and Judith Chazin-Bennahum. Vital to his aesthetic are his training in the Michio Ito technique (the first Asian American choreographer) as well as culturally specific dance forms and martial arts. Burgess has received critical acclaim for his unique synthesis of Eastern and Western aesthetics. The Washington Post says, “Burgess’s work is food for the eye, spare, intimate and perfect as a pearl.”

His choreography has been presented and commissioned by the Smithsonian Institution, Asia Society (NY), the Kennedy Center, Lincoln Center, La MaMa, NY and the United Nations. His work has been performed extensively throughout the United States as well as in, Bulgaria, Canada, Colombia, Ecuador, Egypt, Germany, India, Israel, Korea, Latvia, Mexico, Palestine, Panama, Peru, Russia and Venezuela. He received the District of Columbia Mayor’s Arts Award in 1994 for Emerging Artist and in 2004 he received the Mayor’s Award for Excellence in an Artistic Discipline. In 2001, 2002, 2003, 2006 and 2008 he received the Metro DC Dance Awards for Best Overall Production. For more information on the company visit: Dana Tai Soon Burgess & Co.

Images in this post photo credit: Mary Noble Ours