State of the Art: Middle Eastern Dance by Lori Clark

The Middle Eastern Dance community has always held a unique position in the DC area. On one hand, Middle Eastern dance is one of the few commercially-viable forms of world dance: there are a substantial number of dancers who make their living from performing and/or teaching without subsidy. On the other hand, it has not been integrated into the mainstream modern dance and ballet community, although in recent times, there has been movement in that direction

There is a lot of popular interest in Middle Eastern dance, and the dance community has responded with the development of offshoots that fulfill the needs of its followers. Tribal, Gothic, various exercise systems based on Bellydance, in addition to the traditional forms of Oriental Dance based on Egyptian, Turkish, and Gypsy styles, are all represented by teachers and performers in the DC metro area. In the past, hobbyists formed clubs that organized shows within their communities, like the WAMEDA Hafla events, while professional dancers performed for Arab and mixed audiences in the numerous nightclubs and restaurants that form a network for this extensive sub-culture. Increased acceptance of the genre as a participatory event, which can be enjoyed by the whole family, has followed the increasing numbers of Arab Americans who have made their homes in the area. Along with this change, or perhaps because of it, there have been other developments within Middle Eastern Dance, both positive and negative. 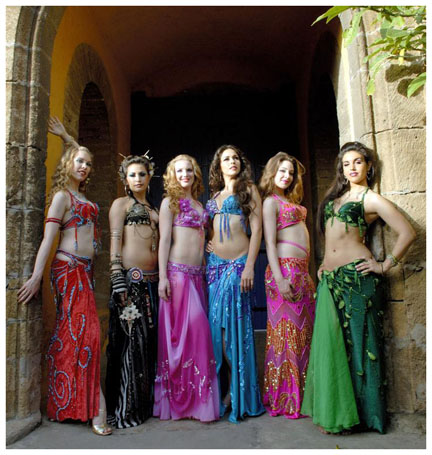 Middle Eastern dance has traditionally been a solo dance form performed in cabaret or folkloric styles. The trend in recent times is toward group choreography for the proscenium stage that can also be adapted for a less formal setting. This is partially the influence of Western dance idioms. Another trend that goes hand in hand with this development is the rise of Bellydance as a corporate entity. There was already a large circuit of workshops, newsletters, and the popular touring company Bellydance Superstars. In the DC area now, one finds the phenomenon of the large ‘Middle Eastern Dance’ school run on the business model established by private, for-profit ballet schools. Where the children’s ballet schools manage to extract the maximum number of dollars from parents through recitals, costumes, competitions, extraneous registration fees, and generally playing upon tutu-swan-princess fantasies, the new Middle Eastern dance schools play upon harem-mother-goddess fantasies of adult students.

One has to give credit for business savvy, but what is being sacrificed in terms of art and ethics? In a bid to take over the local market, unskilled student dancers have been sent out on behalf of the studio to perform for fees that are either shockingly below the going rate or, which is worse, free. More often than not, these students are not up to professional standards in technique or experience. In many cases, they have only studied for six months to a year. Often, these unqualified dancers are also teaching in the studio themselves. This encourages amateurism and undercuts the fees of professional performers, while it damages the artistic integrity of the dance form. The studio will often also attempt to make an exclusive agreement with a venue so that only its own selected dancers and students are presented. In return, the venue is promised that students of the school will attend as customers. The studio is fulfilling the desire for group presentations, but at the expense of the students, and with a concomitant loss of performance quality. The students are also obligated to perform strictly under the auspices of the studio. The school can afford to sell its performances cheaply because it is raking in the money with classes and is organized as a corporate entity. This might be a great business for the owners who are making a handsome profit, but what does it do to the dance form? It might be legal, but is it ethical?

A large studio presenting unskilled dancers and teachers as professionals does more damage than an individual artist who is unqualified. The individuals represent only themselves, while the studio has the look of legitimacy to the outsider because of advertising and name recognition. If the studio only presented competent and skilled performers and compensated them at professional rates, nobody would have the right to complain. Who judges skill and qualification among dancers is another question, but other dance forms seem to be more successful in policing themselves.

The problem of a standard fee has largely been overcome in the Flamenco and Ballet communities. In Ballet, unionization by the Washington Ballet and the Washington Opera has helped immensely. The Flamenco dancers are either proud enough or wise enough to realize that undercutting will eventually come back to haunt a performer, and will alienate the rest of the community. The Indian dance community has also, over the years, maintained a good standard of classical performance and professionalism. Every group has its disagreements and a certain amount of infighting. Certainly the compensation dancers are paid leaves a lot to be desired in every dance form, but the problem is particularly evident in the Middle Eastern Dance world.
Artistically speaking, there are a lot of competent and knowledgeable performers working in the area, but they are being over-run by the over-confident amateur who is anxious to perform in public. Middle Eastern Dance seems to attract more than its fair share of this, as does Flamenco to a lesser degree. The dance form will not be respected by audiences, the owners of venues who hire dancers, those who hand out grants, nor the wider dance world unless its level of professionalism – including unity in pricing, technique, and artistry – is elevated. Middle Eastern dance does not need to be trapped in a stagnant corporate mold. We must challenge practitioners to think ahead to the future, and beyond their own vanity.

Lori Clark performs Arabic dance in numerous venues in the Washington, DC area under the professional name Yasmina. She holds a Master’s Degree in Dance from American University. Lori also performs Flamenco dance for the WPAS Concerts in Schools program, and is frequently seen as a member of the corps de ballet of the Washington Opera.