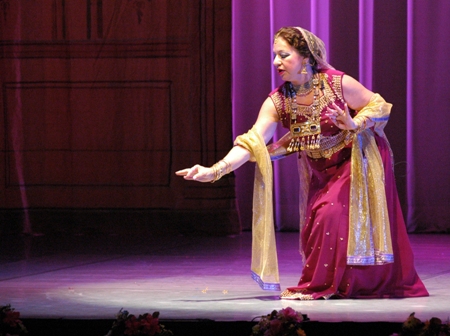 In late September, I traveled to southern Italy for a conference on dance in Europe. I attended as a guest of the organizers, to deliver a paper on my methodology for producing performances of world dance, and to contribute to the evening showcases by performing Manipuri dance from India. It was interesting to me that there were no other performances of non-Western dance during the course of the three-day conference, and no papers on the topic of world dance beside my own. This experience gave me a greater appreciation of our dance scene here in the metro DC area, and in the United States as a whole. As compared to the more insular, almost mono-ethnic nations of Europe, we have a wonderful variety of dance communities here. Beginning with the powerful influence of the great African dance organizations, like Melvin Deal’s African Heritage Dancers and Drummers, and Assane Konte’s Kankouran, the equally long-lived Spanish Dance Society and other Flamenco troupes, moving through the panoply of Asian Indian dancers and dance companies, and recognizing a fantastic array of dance companies whose members are employed primarily by the World Bank and IMF, the Washington, DC-Baltimore metropolis is the greatest world dance center on the Right Coast.

In the past these dance groups have been supported for the most part by the ethnic immigrant communities who haled from the same part of the world as the dance form they practiced. As these companies reach out for a bigger slice of the pie, they are encountering a kind of spandex ceiling that separates dancers who perform in leotards from those who don’t. There seems to be an unspoken rule that dance critics are only going to review two non-leotard shows in any calendar year. Grant-makers seem automatically to relegate applications from non-leotard dance companies to the category of Folk and Traditional Arts, which might be appropriate, but not in all cases. And as far as the Metro DC Dance Awards are concerned, it appears that, so far at least, non-leotard troupes are only eligible for costuming awards.

It is my opinion that the blame for this situation is to be assigned to almost everyone. The world dance performers themselves have often not been eager to exchange their amateur status for the more stringent professional requirements. Presenters have been lazy about working with world dance performers to improve production standards. Critics have been loath to step out of their comfort zones, in order to experience unfamiliar forms and attempt to write intelligently about them. And last but not least, the performers in leotards have been unwilling to open their hearts to the “others,” to share the stages, to accord respect, or even to show an interest. There are a few companies who have attempted to cross the boundary: Tehreema Mitha and Daniel Phoenix Singh have notably brought the worlds of modern dance and Bharata Natyam together, while Shizumi Manale has done the same for Japanese traditional dance. Lesole Maine is working in the realms of traditional African dance and modern dance simultaneously. These dancers should be lauded and encouraged. But the dance community needs to open their eyes even wider to recognize the artists who do not work in the world of modern dance at all, but steadfastly practice and perform their traditional styles.

The fact of the matter is, many audiences actually enjoy traditional dances, world dances, much more than modern dance, once they allow themselves to get past the perception that they don’t understand what they are seeing. I myself seldom understand what I am seeing when I attend a modern dance performance, but I still attend and try my best to “get it.” It would be wonderful if people could attend world dance concerts and allow themselves to enjoy the sheer beauty of the presentation, because in the end, that is what it is all about. The Silk Road Dance Company, one of Washington’s most active world dance companies, recently adopted a new slogan, “Cultural understanding through beauty and delight.” I think this could be a catchphrase for a new era of appreciation for world dance styles in the Washington, DC metropolitan area. 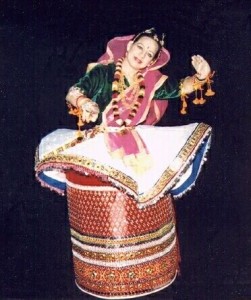 Christel Stevens is currently employed by M-NCPPC, Arts and Cultural Heritage Division, as Performing Arts Specialist in Prince George’s County, Maryland. She supervises and produces the annual Choreographers’ Showcase in partnership with the Clarice Smith Performing Arts Center at Maryland and the annual World Dance Showcase at the Publick Playhouse as well as two summer teen theater touring programs. She organizes the annual Asian Pacific American Heritage Month observances and is editor of Arts Opportunities newsletter. Christel is a member of World Dance Alliance-Americas, the international dance association sponsored by UNESCO; her paper entitled “Presenting World Dance on the Main Stage” was included at their conference “E’ Solo Danza – Is It Only Dance?” in Taranto, Italy in 2006. The paper was subsequently published in the journal Pravaah – The Flow by Jayamangala School of Music and Dance in March, 2007. She has presented and performed at numerous conferences internationally, resulting in a broad spectrum of publications. She is past Chairperson of the Indian Dance Educators Association of metropolitan DC/Baltimore. Christel is a member of the Selection Committee of Dance Metro DC, the organization responsible for the annual Metro DC Dance Awards.